FROM THE AWARD-WINNING SYSTEMSIX TO THE NEW HABIT, CANNONDALE HAS A BIKE FOR ALL RIDERS

From the World Tour to the World Cup to the bike path in the park, Cannondale bikes are found everywhere you can ride. Cannondale has long been one of the most respected names in the world of cycling. From groundbreaking mountain bike design like the Lefty fork to a line of kids bikes that get the youngsters hooked on cycling early, Cannondale pushes the limits on technology and innovation.

Road models ranging from the SystemSix that you’ll find in the Tour de France to the Optima that you’ll find transporting college kids to class. The Scalpel, Jekyll and Habit have you covered on any trail needing a full suspension mountain bike while the F-Si is the lightweight hardtail ride of your dreams. Upgraded additions to the active/fitness line, electric commuters and more make cycling accessible to riders of any age and any ability. 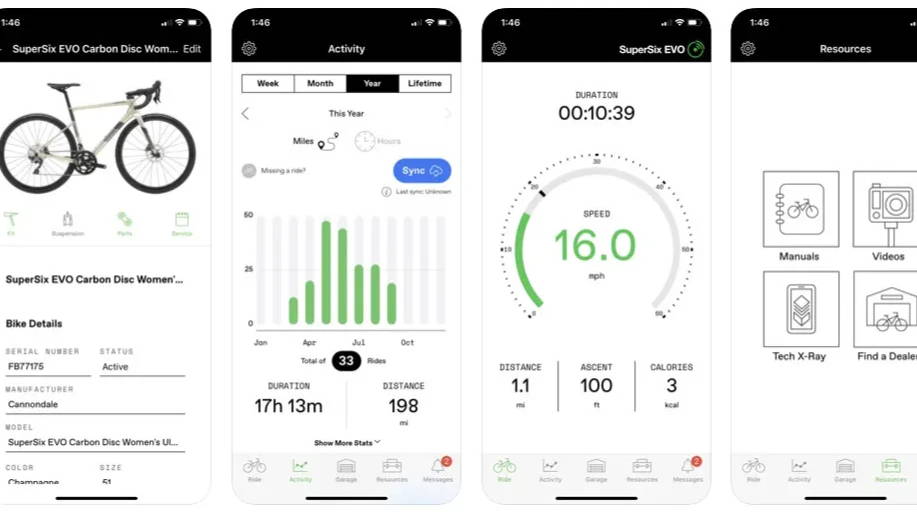 In a world of interconnectivity, smoothless integration means so much. The Cannondale bike lineup helps you track everything related to your bike – and we mean EVERYTHING – with a revolutionary smart phone app and available wheel sensor.

Bicycles don’t have gloveboxes. You can’t stick an owner’s manual in your jersey pocket on every ride without looking a little bit like a dork. That’s one reason why Cannondale created an app for that. Because there’s more than a few times when you want more than just ride data on your smart phone.

Every detail of your bike is stored in the app. Broke your chain and need a new one? There’s an app for that. Want to do some repairs on your own? No problem, load up the app and watch a DYI video on how to adjust your saddle height or tighten up those loose breaks. Out of town and have a breakdown? The app has a registry of Cannondale service center bike shops and will point you to the nearest mechanic. Heck, there’s even a technical x-ray of your bike on the app so you can look at the deeper details and know your bike better.

Are you a calendar nerd? Or maybe need a little help in that regard? The app can track all service details your bike has received. You can even schedule your next service appointment and have a reminder sent to your app when the time comes so you don’t forget to replace that chain or apply lube before it’s too late.

Naturally, bike data is more than just the actual nuts, bolts and tubes of the bike. Most riders are interested in how far they’ve gone and how fast they’re going. With the Cannondale app, you can set it and forget it.

The Garmin Wheel Sensor tool mounts to your front wheel and if you’re riding with your smart phone, ride data – speed, distance, time and calories – is automatically recorded and stored. No need to hit any start buttons, just saddle up, pedal and the data is synced to your smart phone. You can log as many as 30 individual rides before the Wheel Sensor requires syncing with the app.

Another cool, really cool, feature of the Cannondale app is Eco Footprint function. As each ride is recorded, data is calculated with your personal metrics to show you a variety of statistics such as gallons of fuel saved and carbon emission reduction. Now you can feel good riding your bike and feel good about riding your bike. 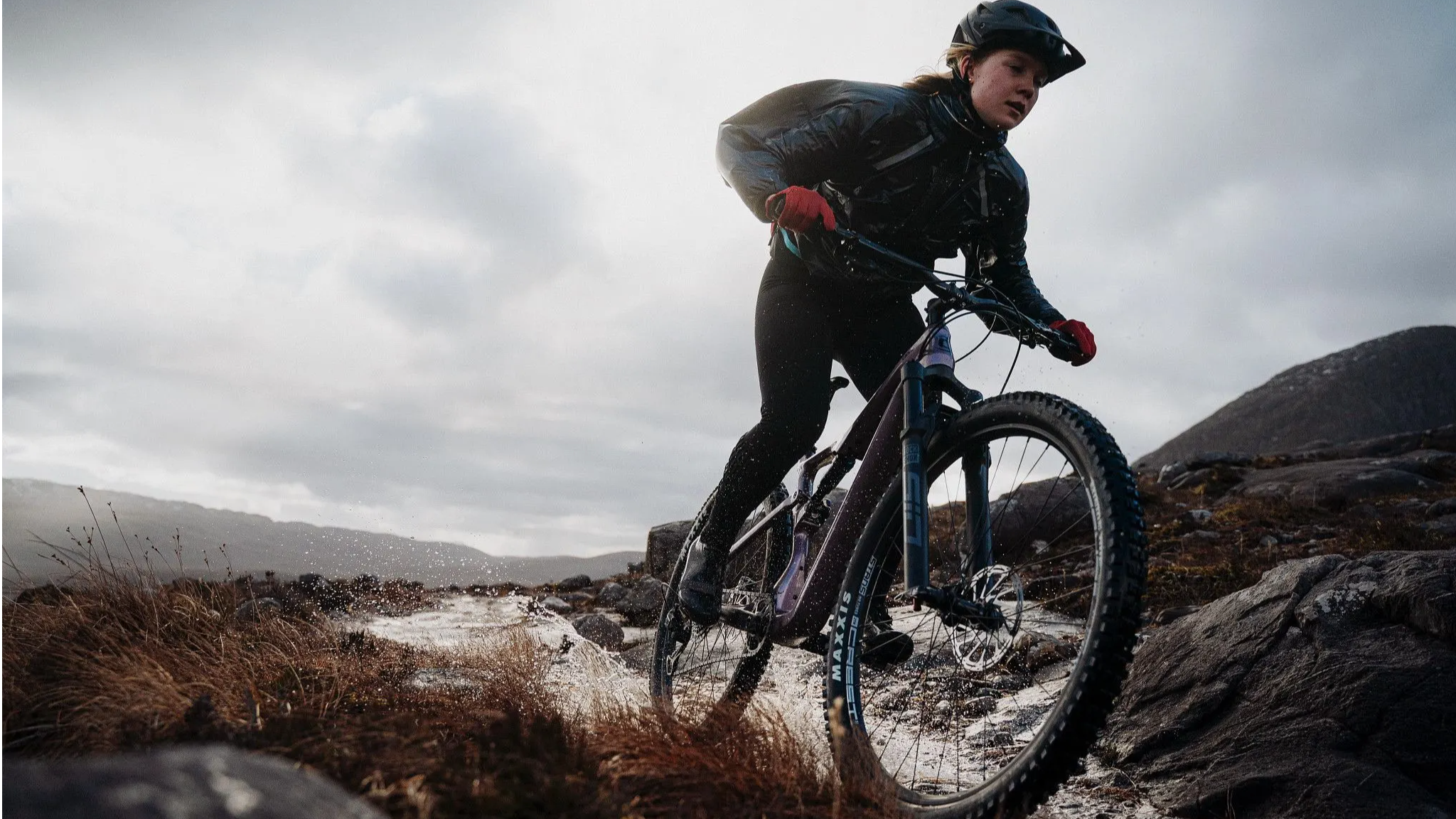 At first glance, most mountain bikes look the same. Tough, rugged frames, shock absorbing forks, thick chunky tires and pedals as likely to dig a chunk out of your shins as they are to help propel you up a twisting mountain trail. First glances rarely tell the whole story, however, and the book on mountain bikes has plenty of chapters to read. Cannondale has spent a couple of decades writing that book and ooohhh, the stories they can tell.

Let’s dig in, shall we? Though not the main character in the story, Cannondale’s Lefty Ocho has a scene-stealing supporting role. The easily recognizable and conversation-provoking front fork is a Cannondale exclusive and can be found on a variety of the line’s mountain bike models. As functional as it is unique in appearance, the Lefty Ocho is part of the story but never gets in the way of the actual plot.

The story opens with the Cannondale Scalpel – the brand’s flagship cross country trail mountain bike. With an insanely lightweight carbon frame and aggressive racing geometry, the Scalpel wastes no time setting the stage. Up hills, across valleys and on to the next chapter at lightning speed with only the smoothest of transitions. In steps the F-Si, a no-nonsense minimalistic hardtail that just gets things done with his sidekick the Cujo. Ultra lightweight, the F-Si is who you call when you need to cover as much ground as possible in as little time as possible without dealing with a bunch of obstacles in the way.

Of course, a story without a challenge is pretty boring. So Cannondale brings out the heavy hitters for the moments when rocks, trees and big bumps line the trail. The Cannondale Jeckyll and Cannondale Habit up the suspension game and, like the heroes with a bit of a dark side, deliver you to a happy ending while leaving a trail of carnage behind them. The Habit increases the travel from the Scalpel line and brings back the standard front fork. Climb and descend with confidence aboard the Habit. The Jeckyll, like its name suggests, has an attitude and with another dose of shock travel. Attack the descents, take risks, leave bodies in your wake.

There is no villain in this story. Only challenges dealt with by a variety of characters ranging from the Fat CAAD for snowy terrain to the entry-level Trail series that offers aluminum frames and quality components for riders young, old, experienced or new to the sport.

Our protagonist? That’s you, of course, and just like the “Choose Your Own Adventure” books for years past, you decide how the story unfolds with each ride you take. 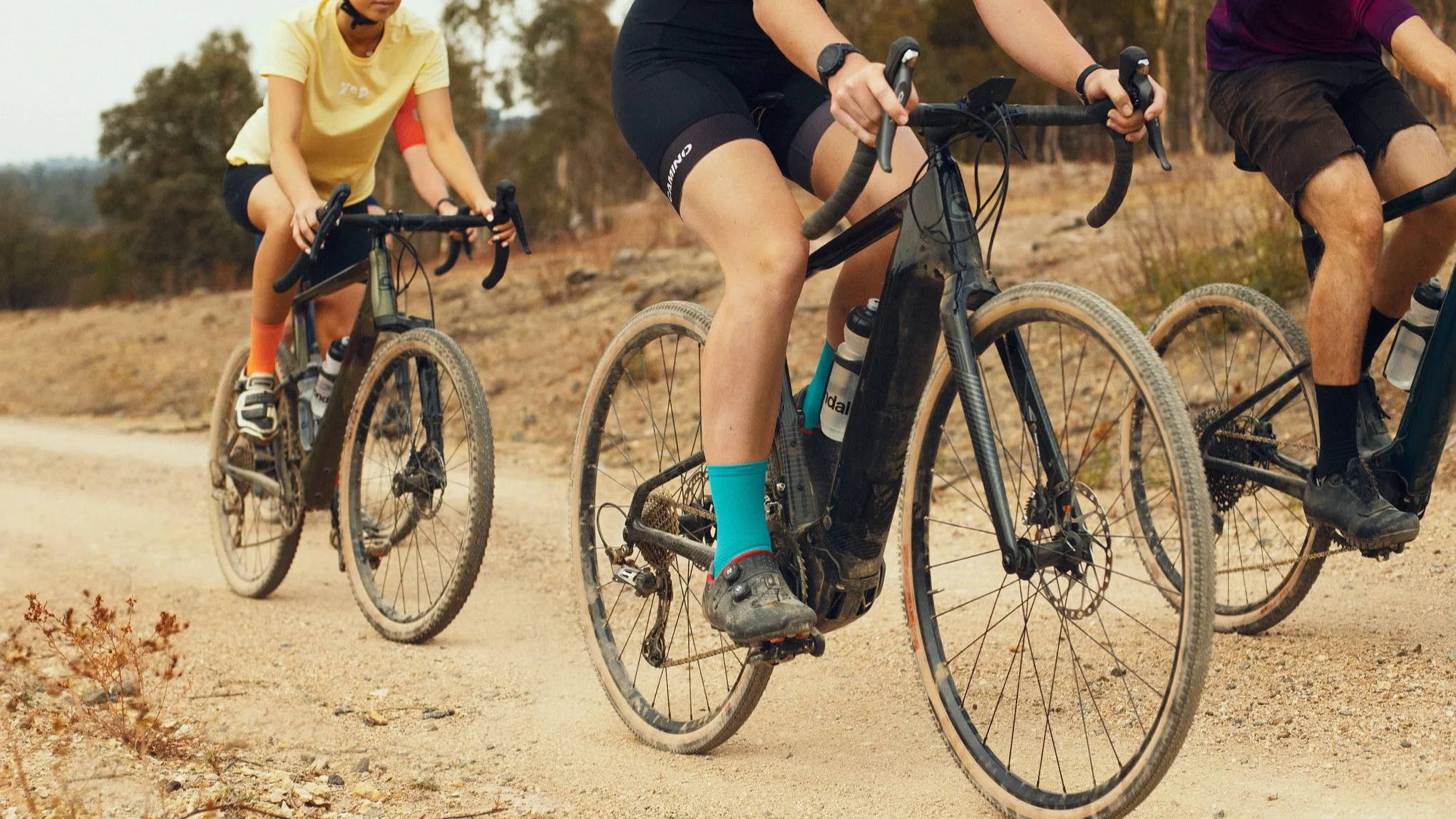 Topstone to the Top Speed SystemSix

Does it seem every bike company makes bold claims about having the best in speed, stiffness, aerodynamics and more? That’s probably because they do, and they’re often correct – in their own special way. So what sets Cannondale apart from the others in regards to superlatives? Science and raw data.

According to the information provided by Cannondale, the SystemSix is “the fastest road bike in the world. Period.” How so?

After extensive testing in wind tunnels and the road, here’s what Cannondale claims: On a 5-percent descent, the rider on the average road bike would need an effort of 300 watts to maintain the same pace as a SystemSix rider with a recovery effort. In a 200 meter sprint, with both riders cranking out 1000 watts, the SystemSix rider would be four bike lengths ahead at the finish line. Riding at 30mph, the SystemSix saves you 50 watts compared to other bikes. The SystemSix requires an average of 10-percent less power to maintain pace in a group ride environment.

Simply put, it takes less energy to go the same speed as other bikes. That means after riding the same distance in the same conditions as the rest of the people in your peloton, you’ll have more matches left in the book to burn on the final sprint.

That’s how science works. If your personal matchbook needs fewer strikes than the next guy, you’re going to light him up in a sprint.

Other Cannondale road models – ranging from the CAAD to the SuperSix to the Synapse and the time trial dominating Slice – each boast similar aerodynamic energy saving effects.

The SuperSix EVO, for example, claims a 21-percent reduction in drag compared to the previous models. When you cut the amount of air you’re fighting against on the road, you go faster and have more energy left in the tank. Science, man.

Of course, not everyone riding a road bicycle is obsessed with setting land speed records and aerodynamic wind tunnel experiments. Some of us just want a good, fun and enjoyable ride on a bike that’s not going to fall apart after a thousand miles.

Cannondale’s dependability is off the charts, too, with high-quality carbon fiber or alloy frames, top-notch components and specifically engineered geometry to ensure a comfortable ride. After all, if your ride leaves you with aches and pains, you’ll be less likely to ride frequently.

For true speed freaks, the SuperSlice triathlon/time trial bike cuts through the wind to give you the best bike splits your body can dial up.

Gravel and cyclocross bikes are also part of the line, because not every road is paved, and offer the Topstone gravel bike set up for backroad adventures while the CAADX and SuperX are tremendous choices for cyclocross racing where speed and course handling are needed at a premium.

Science: It’ll blow your mind and blow away the competition. 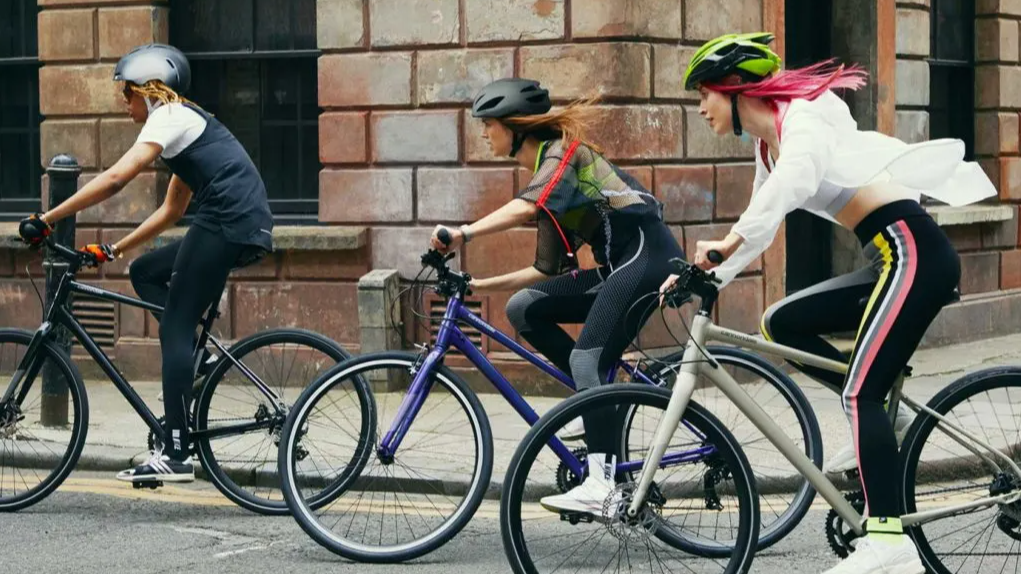 Getting from Point A to Point B is almost never a straight line. And, frankly, it almost never should be. Cannondale has a full range of effective methods for adding as much fun and as many stopping points on your journey as you’d like. Saddle up, pedal on and enjoy your trip on a Cannondale Active/Fitness bike.

Cannondale knows not every cyclist has the same needs or wants. Not racers and certainly not recreational or urban riders. That’s why the options on Cannondale’s Active and Fitness bike lines are as varied as the people who ride.

Starting with the popular Quick lineup, Cannondale has a sleek, simple bike that is a tremendous ride to get around town, enjoy a date ride along the parkway or knock out a workout on a comfortable frame. The Quick is a flat-bar road bike with a more upright geometry – a little more upright, but still nimble, lightweight and most importantly, fun without a lot of bells and whistles to keep track of.

By adding a mild travel fork to the Adventure and Althea lines, you’re able to hit some trails for a change of pace and scenery. Relaxed geometry, quality components and a wee bit of suspension to mellow out the bumps you’ll find on any trail, road or path. Likewise, the Treadwell bike line is a rigid urban cruiser bike that’s great for getting around town. The Bad Boy sports Cannondale’s famous lefty fork, but in a rigid format to accompany its simple, no-nonsense urban commuter design.

Urban, or rural, riders are increasingly turning to bicycles for more than just transportation. Bicycles are proving perfectly capable of transporting stuff as well as people. The Cannondale Tesoro combines a get-around town bike with a haul-stuff-around-town bike rack on back. Attach a basket and take the bike for a quick trip to the market instead of the car.

Electric bikes are also increasingly popular. Cannondale knows not everyone wants to arrive at work a sweaty mess after a bike commute. The Quick and Treadwell offer lightweight pedal assist bikes while the Tesoro, Canvas and Movaro have longer range, cargo hauling capabilities and a burlier riding experience that requires some pedaling to move, but get you to your destination without quite as much physical exertion required.

COME TALK TO ONE OF OUR CANNODNALE EXPERTS TODAY

At Contender Bicycles, our best tools for selling bikes are the people who ride them. Each staff member has extensive experience riding bikes across many brands. To contact us regarding Cannondale, shoot an email anytime to info@contenderbicycles.com or by phone at Contact Us.