Juliana Furtado is the definition of a world-class athlete. After knee injuries dashed her hopes of ski success, she took up cycling and won the US National Road Championship. Soon thereafter, Furtado went on to achieve serious success in mountain biking. During her short 6-year career in MTB, Furtado won five national titles and represented her country at the Olympics. In 2012, Juliana pitched the idea of a full line women’s-specific bicycles to the ownership and management of Santa Cruz bicycles – in a room full of men.

That line, now called Juliana Bicycles, features premium mountain bikes built with women in mind, with women’s-specific contact points and suspension tuning. Their line is expansive, from the long travel Roubion to the trail-ready Joplin. In conjunction with Santa Cruz Bicycles, Juliana Bikes offers some of the fastest, most durable, and technologically-advanced mountain bikes on the market today. Though women's specific bikes and geometry have been around for over a century, many of these designs were based on an upright riding position made to make novice or apprehensive riders feel more comfortable. Juliana makes bikes for the (plentiful) women that ride hard and fast, while still considering the anatomical differences between men and women.

Built to ride fast, far and be loads of fun, the 2023 Juliana Wilder is a full suspension womens specific cross-country mountain bike with a habit for digging the trails. 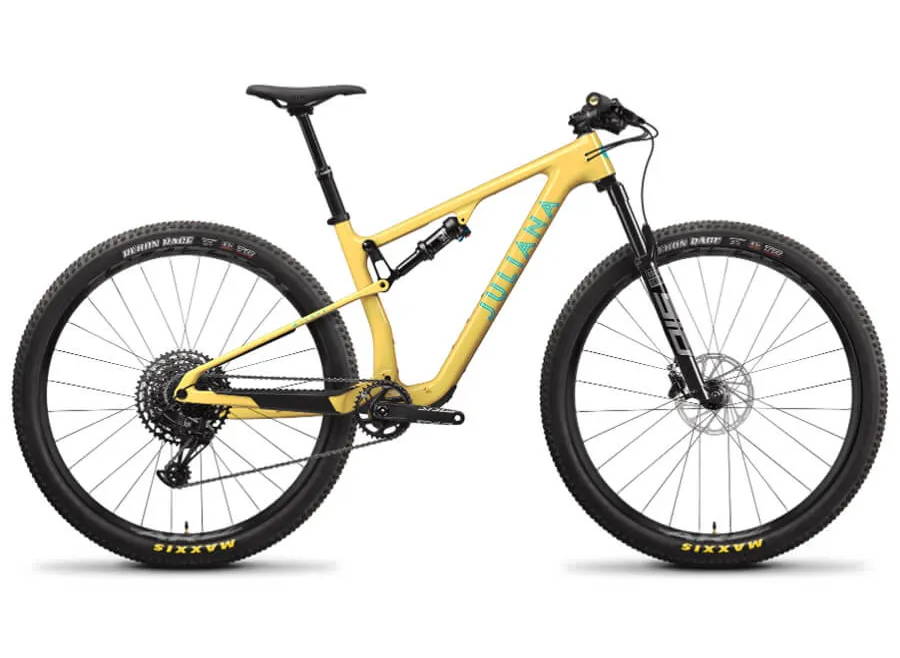 When it comes to a full suspension rig that’s at home on cross country trails and happy to send it down the occasional downhill run, the 2023 Juliana Joplin women’s specific mountain bike checks off all the boxes. 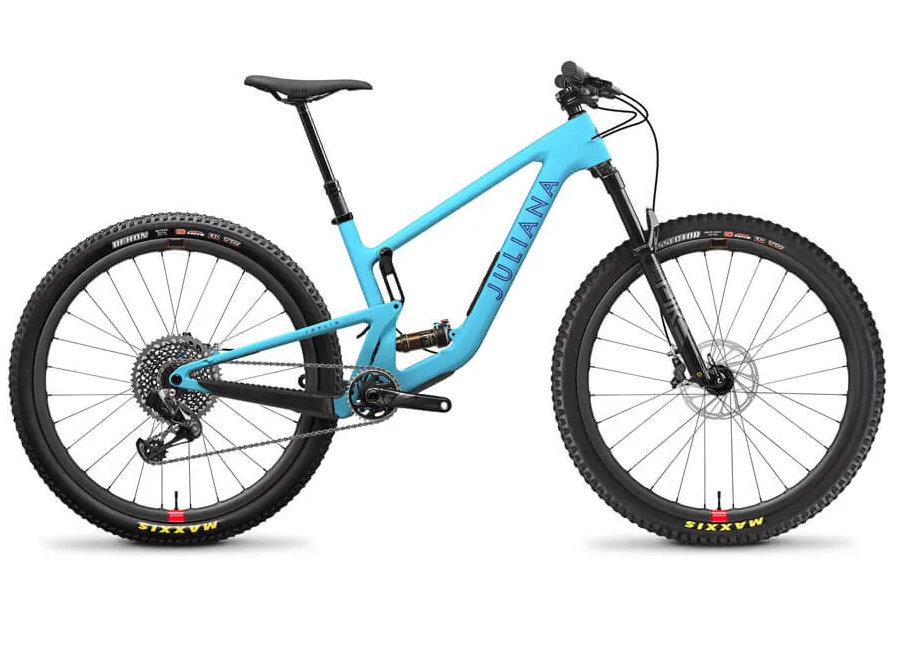 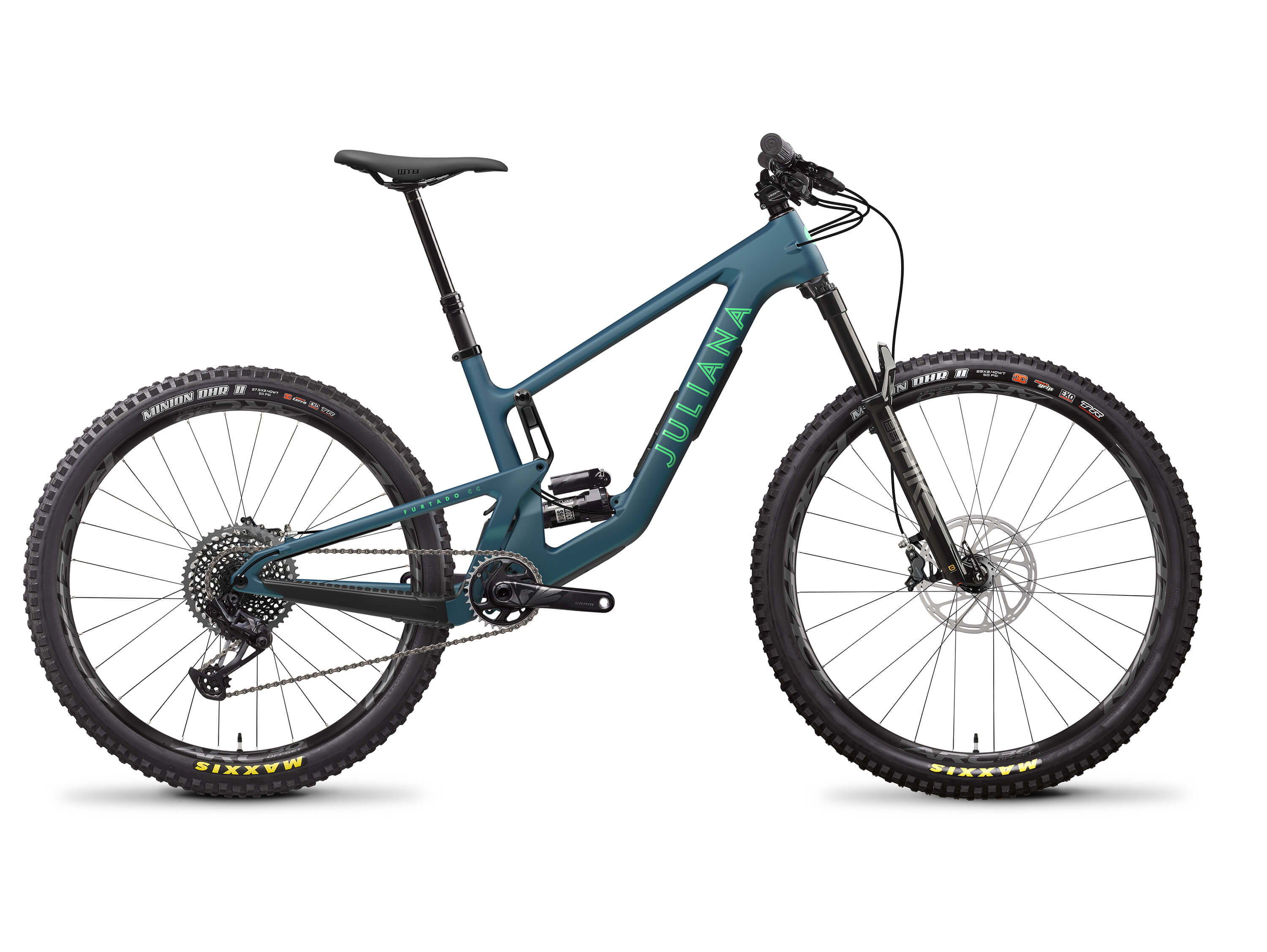 Take all the dirt-love you expert from the folks at Juliana and throw in a drop bar and aggressive road-inspired frame and you get the Juliana Quincy women’s specific gravel bike. 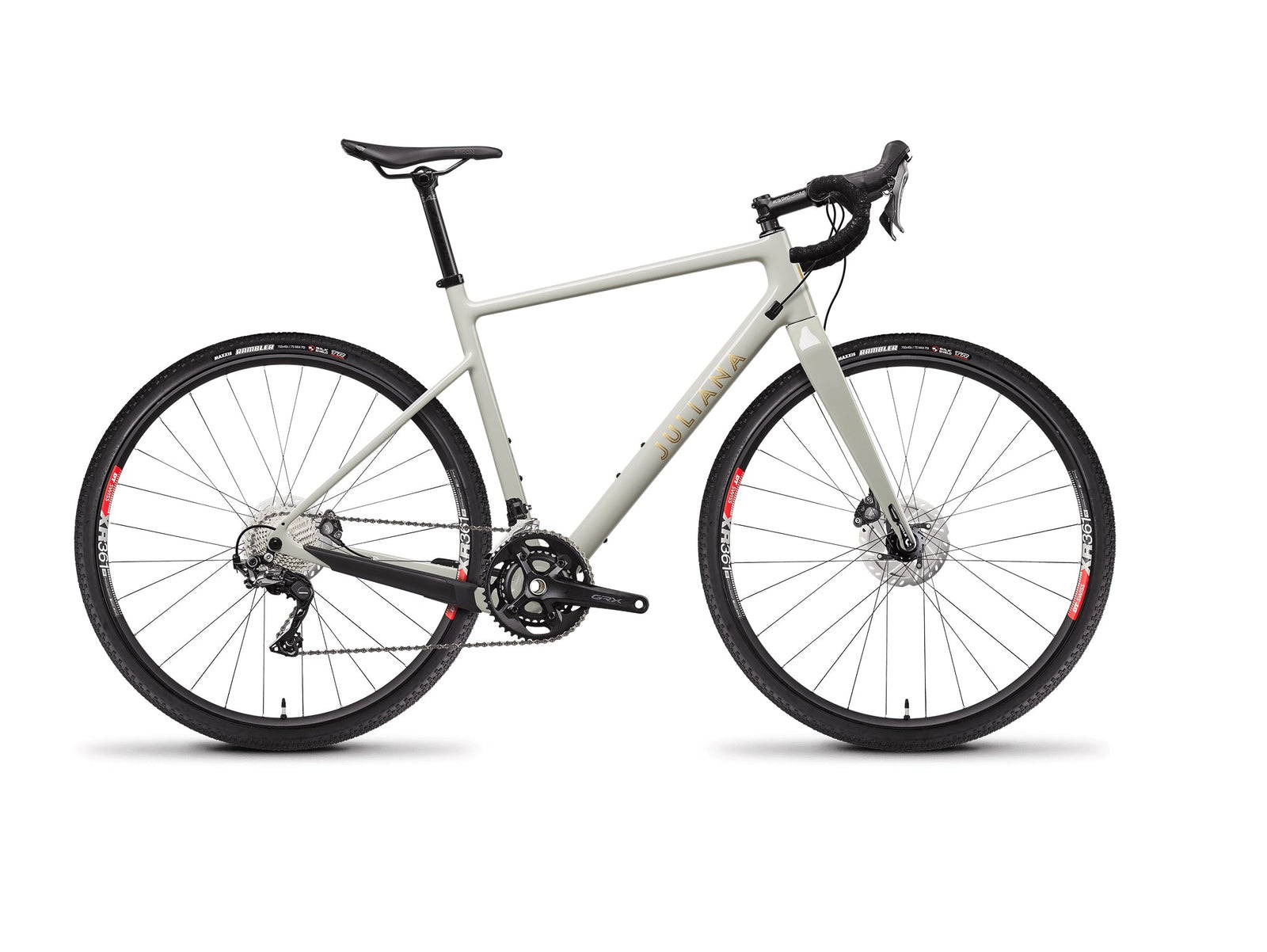 The Juliana Roubion just might be the gnarliest, baddest, most amazing women's specific enduro full suspension mountain bike on the trails.

Boasting a beefy 170mm travel and a business up front, party in the back mullet build with a 29 inch front wheel and 27.5 inch rear, the Juliana Roubion is ready for anything you can throw at it. 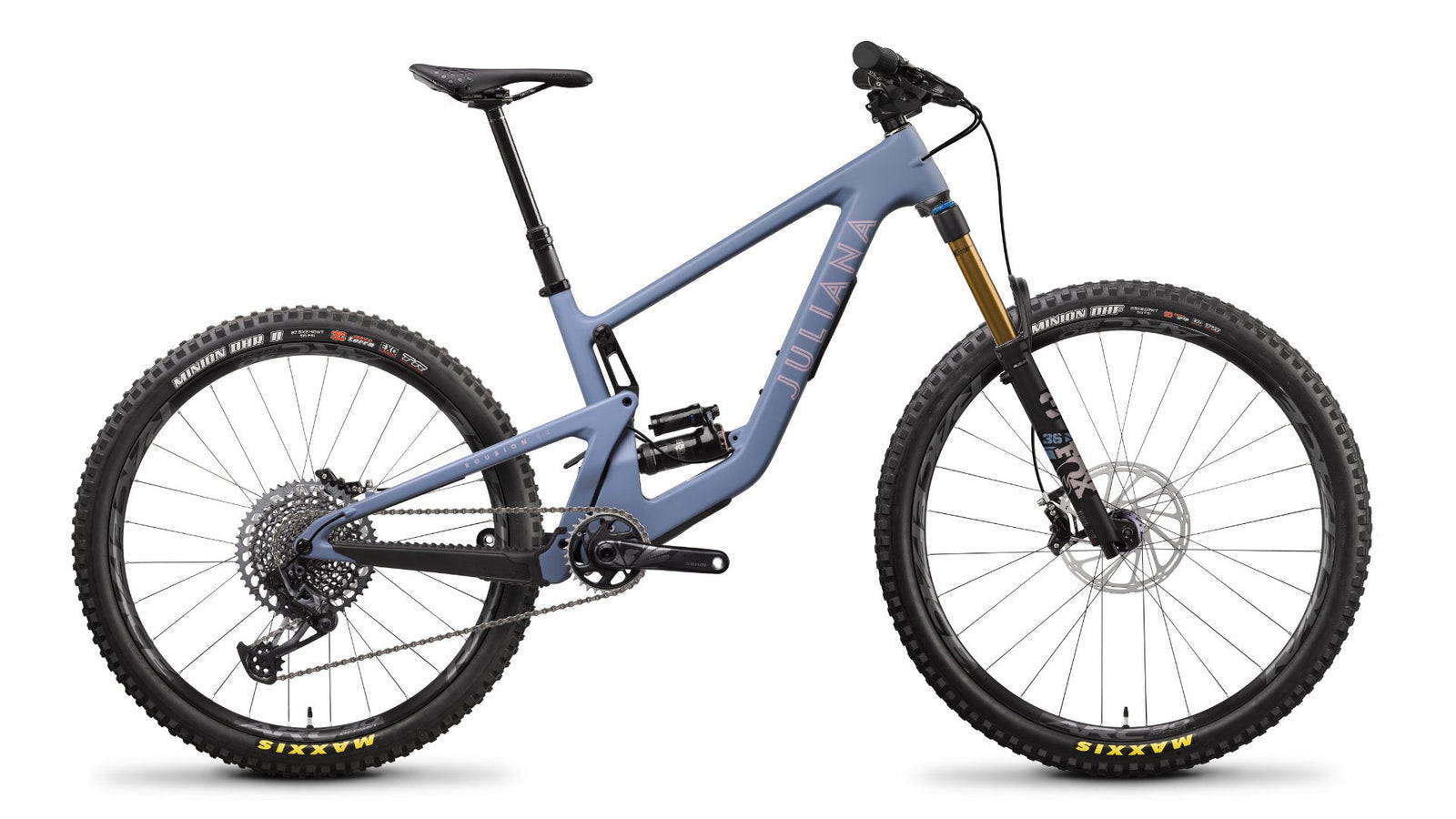 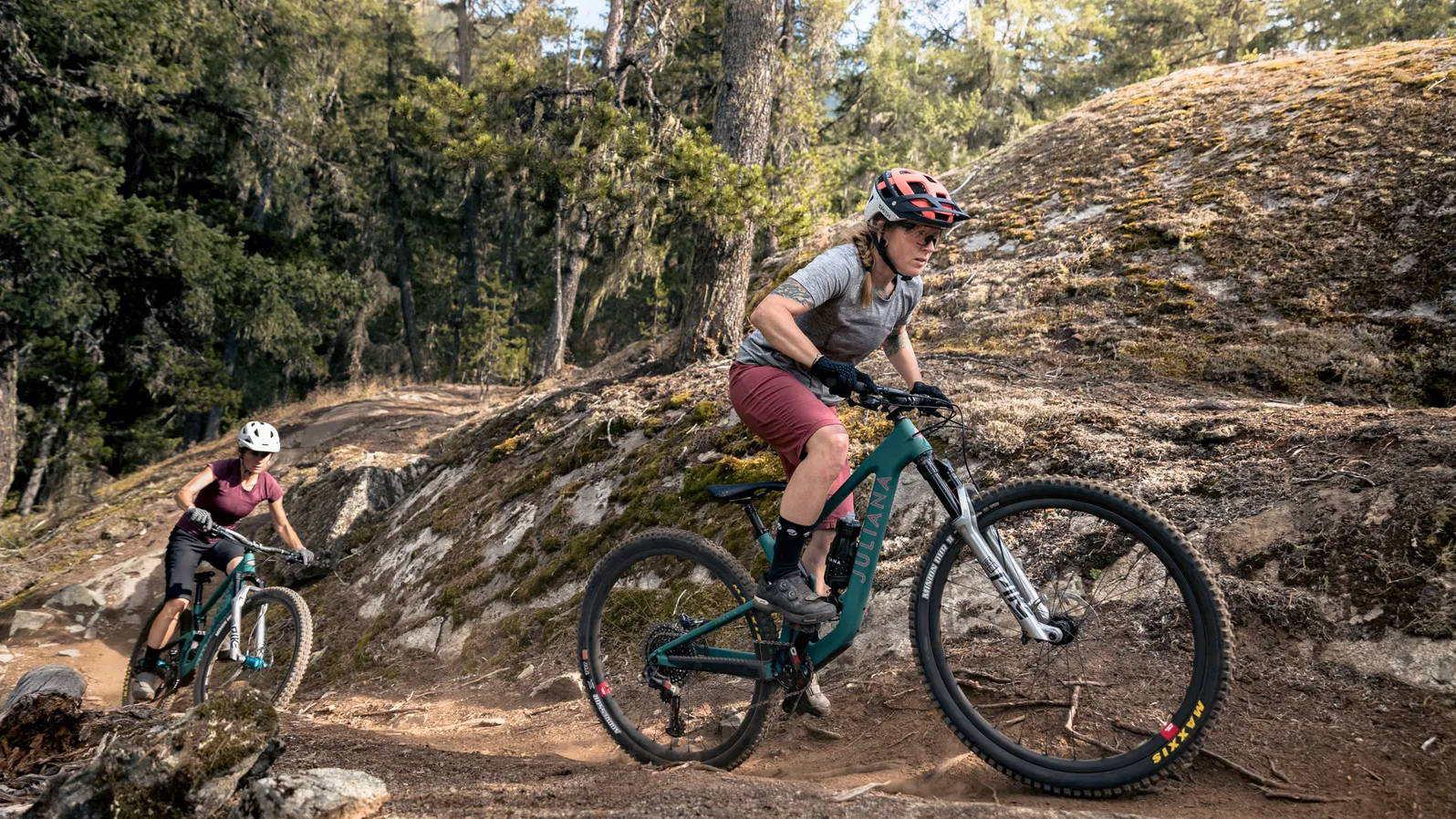 Ready to be a Maverick? Be your fastest self and leave the group in the dusty, whether it be on a climb or a descent? Meet the Juliana Maverick, for those hard chargers who prefer to lead. With 150mm of front travel and 140mm of rear travel this Maverick of a bike is perfect for your all mountain and rugged adventures. The 29” wheels will leave no rock (well almost no rock) unridden from peak to peak. The result of continued Juliana boundary pushing design is a women’s mountain bike without peers. It’s purely intended for the demanding rider who desires a longer-travel bike to push it on big lines, technical terrain, and whatever you decide to throw at it.

The Juliana Roubion is another 27.5” bike built for high speed stability and lower speed maneuverability. Based off of the legendary Santa Cruz Bronson, this long travel 27.5” mountain bike uses 150mm travel and their patented Virtual Pivot Point (VPP) suspension kinematics. VPP is based on the patented principle of having two short links rotating in opposite directions, of which allows for efficient pedaling performance that’s the hallmark of the VPP suspension design, and whether seated or standing the bike feels very efficient, with minimal bobbing. This leads to excellent grip climbing, but the ability to take big hits on fast descents. Meanwhile a one-degree slacker 66 degree head tube angle combines with a 20-25mm longer top tube and shorter chainstay length to create a Rubion that is allows riders to simply focus on landing their next drop. Overall, the Juliana Rubion feels composed everywhere, and incredibly confidence inspiring, whether in Roubion C (standard carbon), or Roubion CC (ultralight carbon) frame models.

The Juliana Furtado is named after the founder, meaning that this is built for her style of riding: aggressive trail riding from a cross country background. The Juliana Furtado trail bike is an ideal companion. Based off of the Santa Cruz 5010, the Furtado is quick and nimble, and well-prepared for the kinds of trail riding found in Northern Utah. This is thanks largely to it’s VPP suspension kinematics and 130mm travel front and rear. When it’s time to descend, the bike’s 67-degree head tube angle, and generous reach make for precise and confident handling. The top-tube-mounted, box-section upper link is a leap forward in durability and stiffness, and the lower link rests cleanly out of the way, dramatically improving clearance and minimizing rock strikes. Trail bikes must be everything to ever rider, but the women’s-specific Juliana Furtado (in both Furtado C level standard carbon and Furtado CC level ultralight carbon) is confidence inspiring all over the trail.

One of the most exciting additions to the Juliana Bicycles line is the Juliana Joplin trail bike, as it blurs the lines between an efficient cross country bike and a more capable trail bike. Based off of the Santa Cruz Tallboy, the Joplin offers a 110mm shock out back, and a 120mm or 130mm fork for 29er or 27.5” + tires. A 68 degree head angle VPP kinematics, and a rear shock flip chip develops the original Tallboy’s playful character into something much more capable than any other XC bike. Longer reach and shorter chainstays fuel that personality on Joplin CC (lightest carbon), Joplin C (medium-mod carbon), and Joplin A (aluminum). It is still very much a bike that climbs tight trails with great poise, never feeling sluggish, or that the front wheel was too unweighted. On the descents, however, it feels faster, and again is much more capable than it’s 110mm travel suggests. If you prefer climbing to the summit of a trail to blasting down the back side of the mountain, this is the ideal Juliana.

Every Juliana is the distillation of their desire to ride and build the highest performance mountain bikes in the world, specifically for women. They don’t compromise on kit, build quality, or performance, and in doing so continue to be the premier women’s-specific mountain bike brands on the market today. 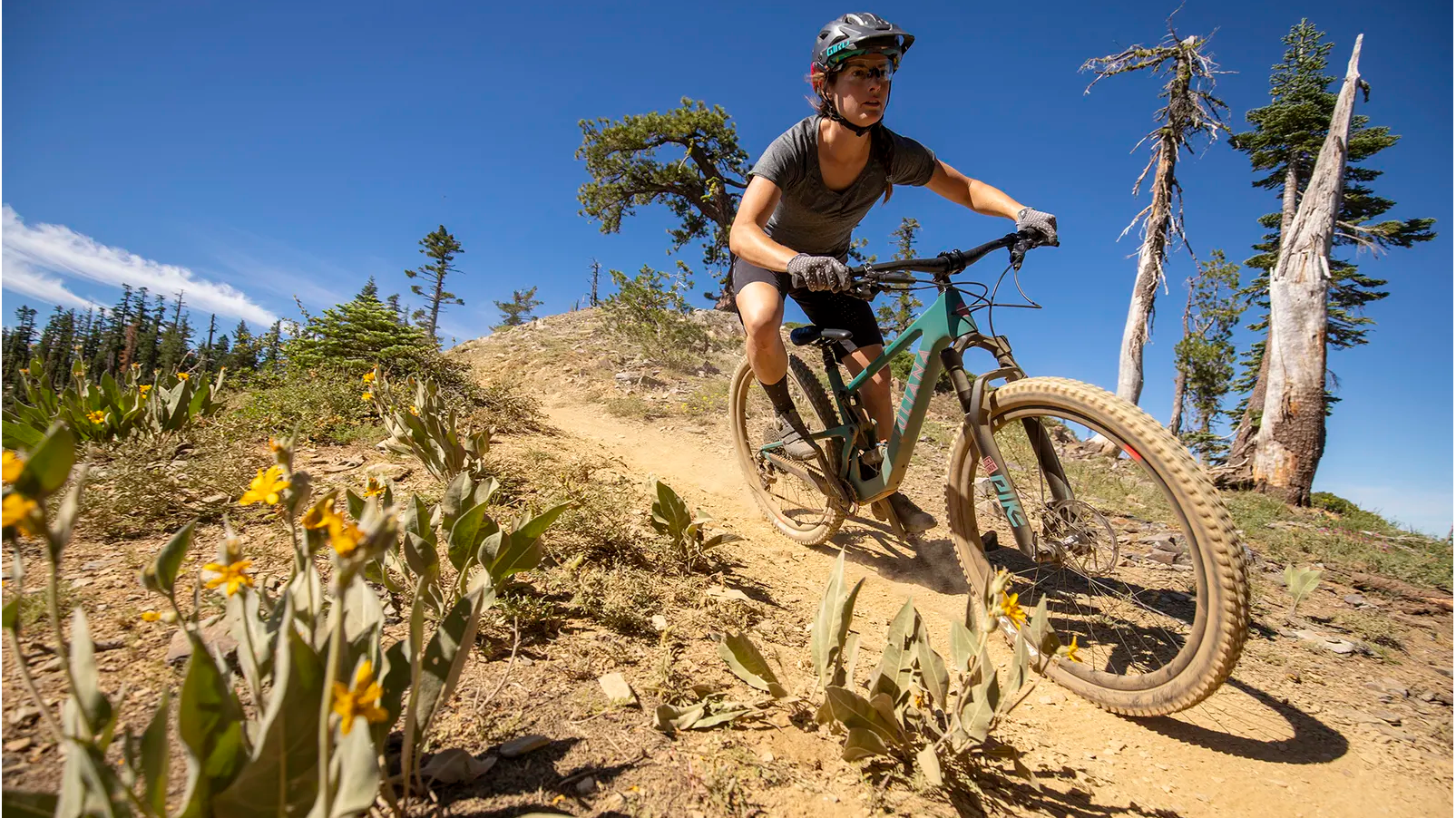 In the cycling world, it is fairly clear that many brands do some combination of trend chasing and copying one another. It’s not inherently a bad thing; innovation spreads quickly and as brands put their spin on the newest technology, bikes become even more optimized. Santa Cruz Bicycles is unique in the cycling world for their creativity; they started off by making their first bike a single pivot full suspension mountain bike, unique amongst the competition. Over 20 years later, Santa Cruz’s level of dedication to building uncompromising mountain bikes is rarely seen in the bicycle world, with their VPP suspension design, carbon fiber manufacturing, and Reserve wheels leading the way.

Juliana Bicycles may be the first brand to produce a women’s-specific mountain bike, but it wasn’t without the help of Santa Cruz Bicycles. The first Juliana was a Santa Cruz model, and from that time on all Juliana models benefit from the same technology that Santa Cruz offers on their bicycles. Together, Juliana is able to offer the exact same technologies as Santa Cruz, with their VPP suspension design, carbon fiber manufacturing, and Reserve wheels leading the way.

Each Juliana mountain bike uses Virtual Pivot Point (VPP) suspension design. VPP uses two short links rotating in opposite directions, one below the top tube, and one just behind the bottom bracket. Not only does this unique suspension design allow for a more active rear suspension early in the suspension travel, but it allows for finely-tuned shock rates and kinematics for a whole range of mountain bikes. The result? Because Santa Cruz has used the VPP design since 1999, Juliana Bikes has a deep well of knowledge on how to tune VPP into all the various shock, drivetrain, wheel size and travel configurations to create the perfect balance for women. In addition, Juliana offers easy serviceability on each VPP-equipped model they offer, along with lifetime bearing replacement available, it is an incredibly stout suspension design. Instead of designing a new suspension every year, they’ve refined it into one of the most efficient, responsive, and strongest rear shock designs on the market today.

Those at all familiar with how Santa Cruz develops their carbon fiber mountain bikes know the lengths they go to ensure strength and longevity in their bikes, and Juliana is no different. While all companies stress test their frames, Santa Cruz takes it up another notch. They famously drop 75lb gym weights onto frames for impact assessment, and use conduct 800lb shear tests on various parts of their frames to give them one of the best carbon fiber strength-to-weight ratios on the market. Each grade of their carbon fiber frames use a one-piece carbon layup of the front triangle which allows fibers to be used that continuously wrap between tubes. This allows the frame to distribute loads and absorb impact energy more effectively, and able to absorb impact better than any other frames they’ve tested. They didn’t just limit this to their top-end bikes; Santa Cruz use the same proprietary processes to create lower-cost carbon frames that retain the same legendary strength and stiffness that makes Santa Cruz, and as a result Juliana, unique.

New to top-level Juliana models is the Santa Cruz Reserve wheelset. The Santa Cruz Reserve line of mountain bike wheels is relatively new to the carbon wheel scene, but they come with a promise: a lifetime warranty. They’ll replace any rim broken from riding for free, with a rim sent out within 24 hours. How are they this confident in their wheels and rims? After plenty of testing far above that of UCI standard regulation, Santa Cruz found that rims needed to be strong around the spoke nipples, as well as around the rim bead. By making their rims as light as possible, they were able to add material exactly where it was needed. The result of their testing and development is a rim that Youtube-famous trials rider Danny MacAskill thrashed – without a rear tire – and still impressed with its durability. Add that to the high quality DT Swiss and Industry Nine hub choices available, and the Santa Cruz Reserve mountain bike wheel is an extremely reliable wheel packaged by an impressive technologically-advanced wrapper.

Just like Santa Cruz, Juliana Bikes is on the bleeding edge of design, refinement, and durability in not just their frames, but their components as well. They offer strongest carbon fiber mountain bike wheels on the market, as well as some of the most capable bikes on the market, as tested by the likes of Danny MacAskill and the Juliana Enduro World Series team. 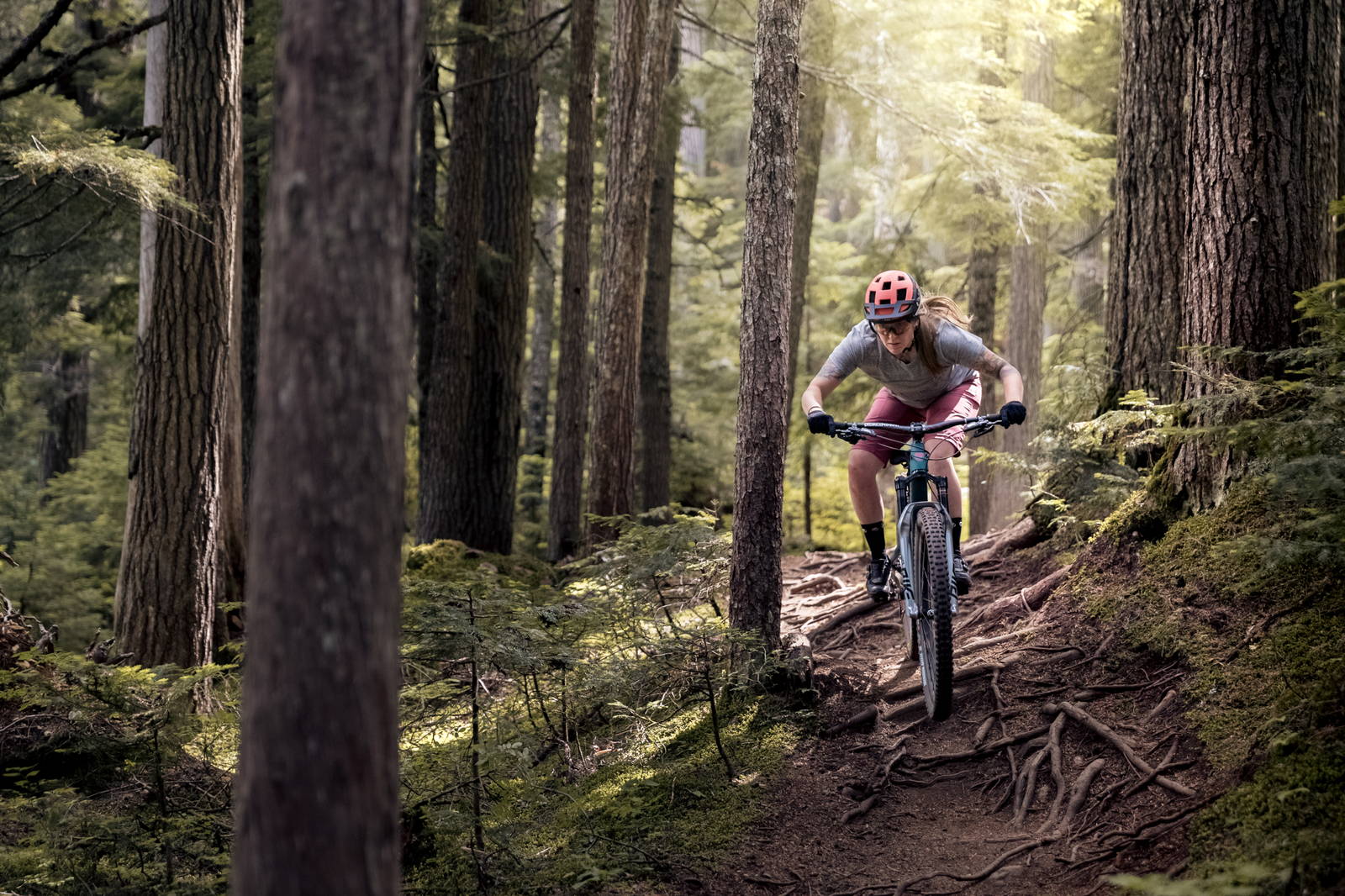 COME TALK TO ONE OF OUR JULIANA BICYCLES EXPERTS TODAY