The ultimate in performance and dependability, SRAM’s Red groupset is available in three models ranging from the old-fashioned mechanical shifting to electronic shifting. SRAM’s Red eTap AXS groupset is exactly what you’ll find mounted to the best bikes on the planet.

Tapping into a market that demands a variety of high-end gear, SRAM has three versions of Red. Introduced a few years ago, Red eTap is the electronic shifting version of the groupset while Red is the standard 2x11 speed luxury mechanical shifting gruppo. More recently, SRAM introduced Red eTap AXS as it’s top of the line offering.

To know the difference between the two eTap versions, we need to understand what eTap does and what you get with AXS. The eTap electronic shifting system is what makes both work and for the most part can be described as the electronic hardware of SRAM’s drivetrain. AXS, on the other hand, is an extra bit of functionality that is primarily software based.

But that is not the only distinction. Red eTap AXS is a 12-speed drivetrain with 1x and 2x options. Red eTap is 11-speed and lacks some of the customization features offered by the AXS system but does come in 1x or 2x setups.

With AXS, you’re able to create a rider profile through a smartphone app. Each version is available with an optional power meter integrated to the crank. With AXS, you can log in, upload your ride data and overlay it with your AXS data - enabling you to pinpoint exactly how many watts you were pushing and which gearing you were using.

Sitting below Red on SRAM’s hierarchy of road groupsets is Force. Like its more expensive counterpart, Red, SRAM Force has three options to find your favorite. Traditional mechanical shifting is the affordable way to have an excellent drivetrain for your road or gravel bike. Add eTap AXS for a wireless shifting upgrade for a refined riding experience without the top-end hit to the bank account. Force 1, for those who want to save a little weight, is a 1x11 speed version of Force. You’ll get a 12-speed cassette with SRAM Force eTap AXS.

Placed similarly on the cycling food chain to Shimano’s Ultegra groups, SRAM Force provides many of the same qualities and technology of the Red groupsets but with different weights for the components.

You’ll find Force 1 on cyclocross and gravel rigs where more gearing in back is preferable to another ring up front.

Force offers a power meter option that, unlike Red, is not integrated but is an add-on spider-based unit. That means you have added flexibility should you want to change chainrings to create your ultimate sweet spot for gearing.

Like Red, the Force eTap AXS comes with a suite of technological features that can make your ride better in ways more than just quick electronic shifting. The rear derailleur is compatible with either a 1x or 2x setup.

SRAM likes to call its AXS tech an ecosystem. With that in mind, Force AXS parts can communicate with bluetooth paired Red AXS as well as the mountain bike Eagle AXS groups. You’re able to mix and match components if that’s your thing, without worrying about pull ratios.

Electronic shifting is only for the bike snobs, right? Not anymore.

SRAM is bringing its eTap AXS wireless shifting technology to the masses with the release of the Rival eTap AXS groupset, making electronic shifting within reach for even the budget level cycling enthusiast.

Available as a complete drivetrain, or ala carte for those looking for just a couple of upgrade pieces, SRAM’s Rival eTap AXS uses the same technology as its top-tier siblings SRAM RED and Force, but understandably comes in a heavier package. 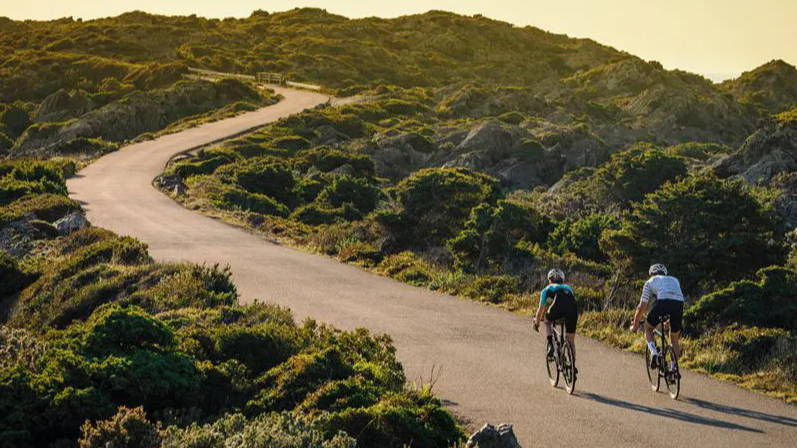 Budget friendly but dependable, the SRAM Apex groupset is found on road bikes that don’t ask for or need a lot of bells and whistles. Available as a 10-speed drivetrain in the double-chainring version, you can also get SRAM Apex as a 1x11 setup. Hydraulic disc brakes or mechanical rim brake options are also options. If you’ve got a bike frame in need of a drivetrain overhaul and you’re not picky, SRAM Apex will provide you with dependable shifting to keep you on the road.

If you’re looking for high performance and speed on a mountain bike, look no further than SRAM’s XX1 drivetrain family. The top-tier offering from SRAM is found in World Cup races with pros like Nino Schurter as well as on local hot laps with the people who race primarily against themselves and treat themselves to the best.

Available in XX1, XX1 Eagle and XX1 Eagle AXS, this groupset is all about fine tuning your ride to get the best possible performance on the trails. XX1 is an outstanding groupset in its own right with a 1x11 speed drivetrain that provides superb mechanical shifting without the bump in price from the electronic shifting AXS upgrade.

XX1 Eagle employs SRAM’s Eagle technology to make its components compatible across the Eagle ecosystem. As long as you’re using Eagle parts, you can mix and match the drivetrain parts to create your ideally priced and performing group.

At the top of the list is the XX1 Eagle AXS drivetrain. Ultra lightweight with carbon fiber and alloy parts, you’ll be hard pressed to find a more responsive and rugged drivetrain. Available with a power meter if you want, XX1 Eagle AXS pairs with a smartphone app to make data analysis easy.

Next is the XX1 Eagle drivetrain without the AXS electric shifting. Same tech as XX1, but with the Eagle ecosystem compatibility benefits. 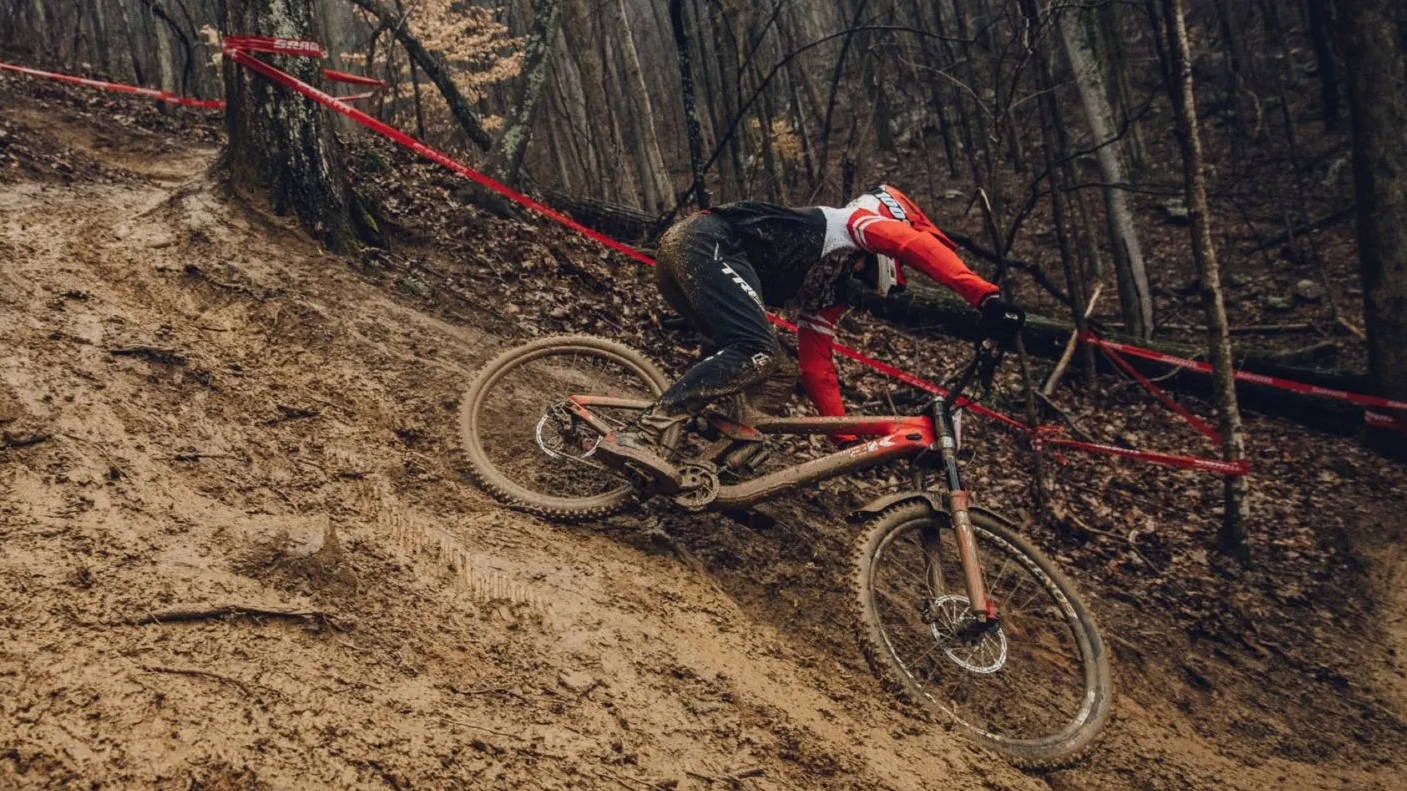 A little bit heavier, but just as tech savvy as the XX1 family, the SRAM X01 drivetrain groups drop the price while keeping the performance. Also similar to XX1, the SRAM X01 gruppos offer options.

You can get X01 in Eagle or Eagle AXS to upgrade your ride. Unlike XX1, there is a X01 DH version specifically engineered for downhill and enduro riders and their unique style of hitting the trails.

If you’re the kind of rider who focuses on durability and reliability rather than a few grams here and there, the SRAM X01 mountain bike groupset will be hard to beat and weighs only 46 grams more than its XX1 sibling. Available in an 11-speed drivetrain in X01, or 12 speed in the Eagle and Eagle AXS version, SRAM X01 is exclusively a 1x drivetrain. X01 comes with a 10-50 tooth cassette while the Eagle version take things up a notch with a 10-52 setup.

The DH version puts the focus on being durable and comes in 7-speed or 10-speed options. For the gravity junkies who still want performance when they need to pedal, X01 DH fills the bill. 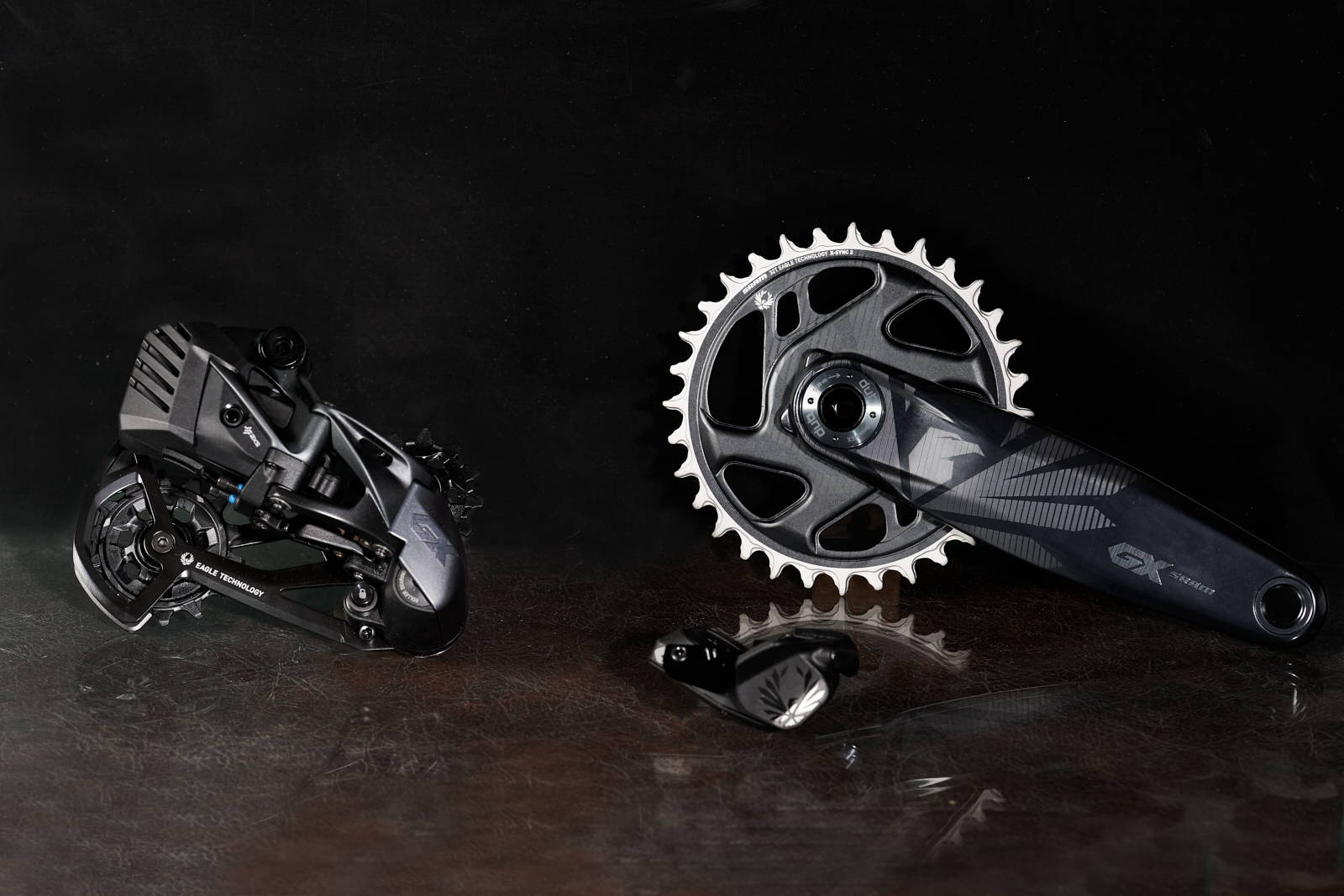 Performance on a budget is what you get with SRAM’s GX family of groupsets. Viewed as a dependable, but heavy, groupset, GX got a much-hyped upgrade recently with the addition of GX Eagle AXS to the market.

Simply put, SRAM GX gets the job done and done well. As XX1 and X01 technology improved, trickle down engineering has benefited GX to the point it’s a perfectly acceptable racing groupset. By adding an AXS upgrade kit for only $600, you can transform any non-AXS Eagle equipped bike to GX Eagle AXS in a flash and have what will feel like a completely different bike.

With the base GX system, you can run 1x11, 2x11 or 2x10 chainrings. Upgrade to GX Eagle and you get a 1x12-speed drivetrain. GX Eagle AXS adds wireless electronic shifting to the mix along with a smartphone full of tech features on the SRAM AXS app.

A bombproof DH option is also part of the GX family. With just 7 speeds and superb durability, SRAM GX DH puts the gravitas in gravity. 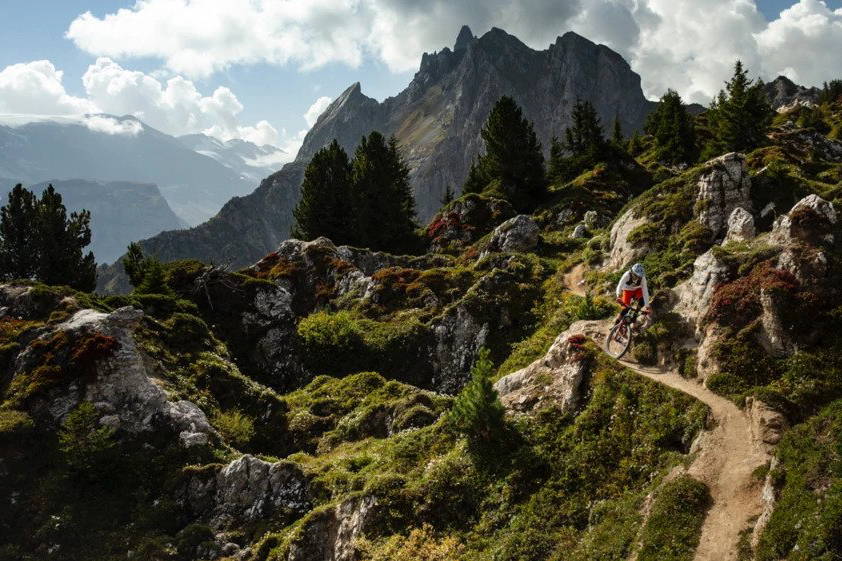 Entry level mountain bikes often have pretty poorly thought of components. That’s not necessarily the case with SRAM NX and SRAM NX Eagle equipped rigs. Strong, performative and thoroughly capable, SRAM NX is a 1x11 speed drivetrain while NX Eagle adds another gear at 1x12 speed and provides all the cross-compatibilty the SRAM Eagle ecosystem provides if you ever need to replace or upgrade a portion of your drivetrain. 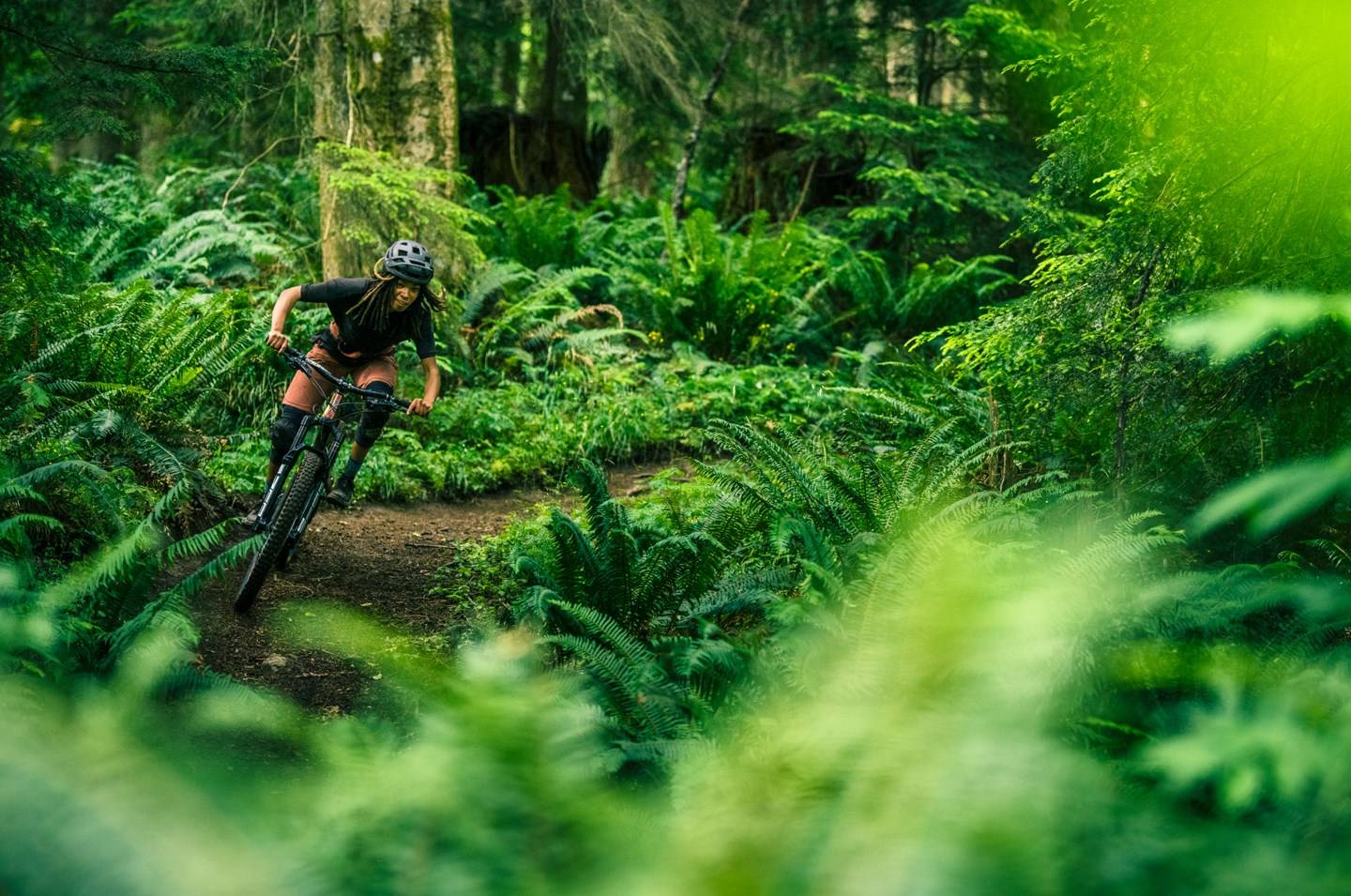 SRAM recently acquired the pedal division of Time Sport. Time has been making bikes and bike parts in somewhat small batches for a long time, and now that the pedals are part of the SRAM family, you can expect to see new technology such as integrated power meters to add analytics to performance.