Your Insider's Guide to the Orbea Oiz

Put the new Orbea Oiz mountain bike beside the previous iteration, and you’d have a hard time telling them apart. That is, at least at first glance. Dig deeper and this revised Orbea Oiz bike adds a whole lot of comfort, control, and capability without sacrificing the pace and performance that the Oiz is known for.

As before, the Oiz is available in three frame iterations: an aluminum frame, a mid-range OMR carbon layup, and an ultralight OMX carbon frame. Better still, the Oiz offers 120mm suspension across all models, more than the 100mm suspension most cross-country bikes offer. That it does it without adding weight makes this the best cross-country bike the Spanish company has made yet. Don’t call this a downcountry bike, at least that’s what Orbea is saying. Rather they’ve doubled down on the cross-country pedigree that makes the Oiz special, just with some necessary learnings from the KMC Orbea Racing team.

Those learnings come in the form of increased suspension travel. Rather than the 100mm suspension typical of most cross-country bikes, all Oiz bikes receive 120mm suspension. The current suspension is an update of the previous single pivot layout, with the shock mounted at the toptube being driven by their compression-molded Fiberlink. Part of the advantage of this shock placement is the bike’s i-Line cable routing, which cleanly routes the lockout-controlling cable through the toptube and to the suspension remote. That level of integration is nice, but the new Oiz also uses Orbea’s SIC system that routes the cables through the headset cup. Doing so might contribute to a clean overall look but it certainly brings about some worries, especially regarding user-friendliness. However, Orbea says that it's system brings about some benefits: a larger headset system means the upper and lower bearings are the same now. Cables and the rear brake hose can be trimmed shorter than before, minimizing rattles from the front of the bike. And importantly, Orbea says that there is no proprietary bar or stem required with their new headset cable routing. A win is a win, we guess.

That increased user-friendliness also comes from larger pivot bearings that are better sealed from dirt and grime. These larger bearings should also be easier to find replacements for should that come down the line.

Orbea has decided to route their cables through an in-house OC headset. These cables then go through flexible guides running through the triangle past the main pivot and to their destinations. This is combined with a new steering block that prevents the handlebars from smacking the top tube should you crash your bike. Bars will still be able to turn about 90 degrees in either direction; anyone who loves making super tight turns at 1 mph in the parking lot might be out of luck though. The headset cable routing style is only available on the top OMX frames; OMR carbon and alloy frames retain a standard cable entry through the downtube. And new to the Oiz is that the OMR carbon frame offers the same stiffness and durability of OMX frames, just a bit heavier due to a simpler carbon layup.

New Oiz frames use a press-fit bracket and receive clear frame protection installed at the factory on top of a rubberized chainstay protector too. Not enough XC bikes come with frame protection, and it is nice to see Orbea take a step toward (lightweight) protection here. And importantly, all frame sizes offer two bottle cage mounts within the frame.

A top level Orbea Oiz OMX frame weighs in at a stated 1740g with shock, painted and in a size medium. Expect an Oiz OMR carbon frame to weigh about 1950g, or still lighter than an array of cross country mountain bikes costing much more. Orbea is also proud to note that an Oiz M-LTD bike weighs in at 22 lbs even (9.98 kg).

Orbea has joined SCOTT in offering a dedicated cross-country mountain bike with 120mm suspension travel. The change makes sense: we sold a lot of the previous-generation Oiz TR, and adds suspension compliance without sacrificing much weight, pedaling efficiency. Nonetheless, Orbea sought to make changes largely with the input of Team KMC Orbea. One of the kinematic goals was to use the same regressive shock setup, but make it more active in the mid and end stroke than the previous Oiz. While the bike’s overall leverage ratio doesn’t change much from years past, it is a bit flatter through most of the curve before ramping up slightly at the very end to avoid a harsh bottom out. That regressive suspension curve is paired to a high anti-squat value to ensure the bike has a good pedaling platform. 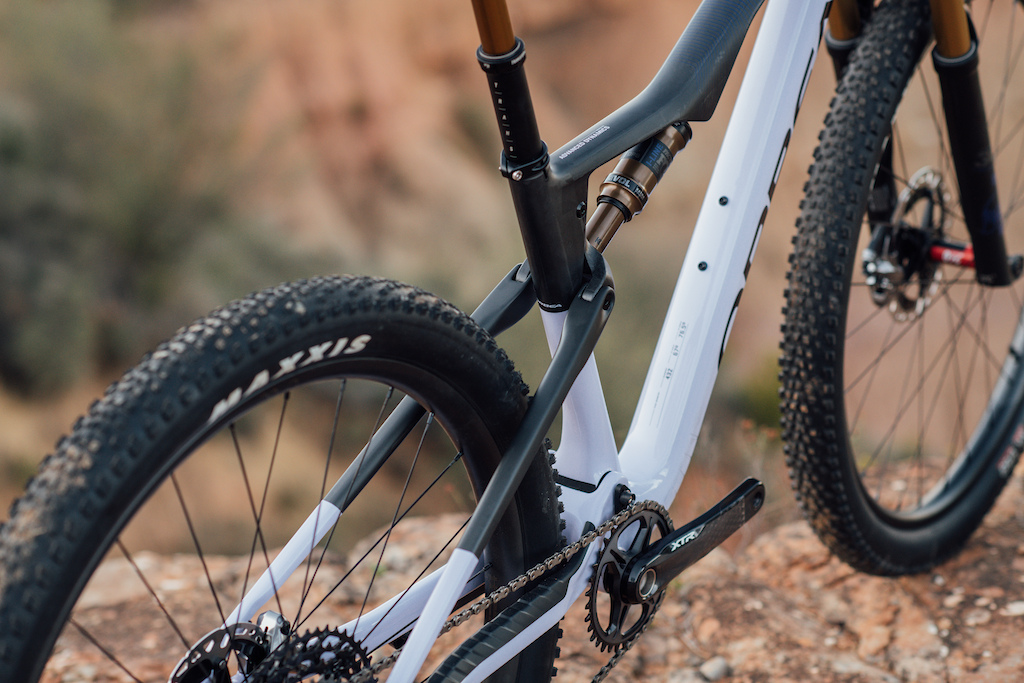 Orbea continues to offer the Squidlock remote. This gives Oiz riders the ability to adjust suspension between Open, Medium, and Firm modes for the shock and fork simultaneously. The Squidlock also controls the fork’s damper, from Open to Firm. When the shock is in its Medium mode, the fork remains open. The cable to the shock runs through the toptube; the shock itself - or rather it's cable lockout positioning - was designed by Fox specifically for the Oiz.

All sizes see a roughly 15mm increase in reach figures across all sizes. Orbea says that is moreso for handling characteristics rather than rider positioning; most sizes also receive a 10mm shorter stem than the previous year’s bike. What it does do is increase the front center length of the bike to something roughly similar to that of the SCOTT Spark and Santa Cruz Blur. Those wanting something seriously slacked out in this case will likely want a BMC Fourstroke.

One benefit of the additional front center length is the inclusion of a 76.5 degree seattube angle available across all sizes. Taller riders often get the short end of the stick when a mountain bike has a kinked seattube, as the stated seat angle often is far slacker the higher up they place the saddle. Too far back on the bike and weight distribution is off, making the front end needlessly light on tight, technical climbs. But in the case of the new Oiz, the straight seattube means the saddle is at 76.5 degree regardless of saddle height, just how the engineers designed it. Very nice.

Bottom bracket drop measurements also drop slightly compared to the previous generation in an effort to improve stability at speed. The Orbea Oiz M-Pro AXS has historically been one of our favorite bikes, and that continues to this latest generation. The Oiz M Pro AXS receives Fox Factory suspension, a SRAM GX Eagle AXS drivetrain, Oquo carbon wheels with DT Swiss 350 hubs, and a carbon OC handlebar. Seriously nice kit with no upgrades needed, and one we expect to stock regularly. This is also the gateway to MyO paint customization. Alternatively, we have quite a bit of love for the Orbea Oiz M10. It shares the same lightweight Oquo carbon wheels, Fox suspension, Shimano XT drivetrain and carbon handlebars with the M-Team. However it receives the OMR carbon frame that is a bit heavier. This is also a bike we expect to stock regularly. Finally, we’re big fans of the Oiz H30. It might be the entry point to the Oiz lineup, but it still comes very nicely equipped with Fox suspension front and rear and Shimano Deore and MT201 brakes. The touchpoints are excellent, with the same grips as other Oiz models and a shop favorite, the Selle Italia X saddle.

While the Orbea Oiz sees a whole bunch of changes to increase it's capability and ability to perform on myriad surfaces, this isn’t a downcountry bike. Orbea even goes so far to say this too. What it is, then, is an evolution of one of our favorite cross-country mountain bikes made lighter, smoother, and overall more efficient.

Between the myriad of changes and the ability to customize the bike’s paint and components through MyO, we expect the Orbea Oiz to continue to be one of our go-to XC bike choices. Want one for yourself? See our inventory live now on the website, or contact us for specific availability.